I’m back from the whirlwind that was my Writers of the Future experience – but I’ve been doing so much writing about it between an upcoming article for Compelling Science Fiction and a Reddit AMA taking place tomorrow that I’m devoting today’s entry to an entirely different subject.

One of the many things my WOTF week served to remind me of was my love of the old classics – and the fact that it’s been a long time since I’ve read any of them.

Accordingly, I’ve taken on the possibly-entirely-too-ambitious project of reading every Nebula Award-winning short story and novella, going back to the Awards’ inception in 1965.

I’ve read many of them before. Indeed, they were the literature I grew up on. With Jack Williamson’s novel “Firechild” as my gateway drug, I promptly started checking out as many Nebula Award anthologies as my local library would permit.

The Nebulas started at a particularly interesting time in science fiction history – the “New Wave” was a time when the sci-fi community was attempting to distance itself from its adventure-pulp reputation and prove that it was Real Literature by tackling heady subjects and using experimental narrative forms.

I personally love the stuff.

Out of the New Wave came one of my favorite writers of all time – Roger Zelazny.

I’ve talked before about my love of Zelazny’s ability to seamlessly interweave science, mythology, and deeply personal dramas into one coherent story arc.

He’s done it again in “He Who Shapes” – his 1965 Nebula-winning novella which was later expanded into a (very short) standalone novel titled “The Dream Master.”

“He Who Shapes” follows a psychiatrist in an era of “neuroparticipant therapy” – a discipline in which a therapist literally shares their patient’s neural activity to diagnose and treat their problem.

Charles Render is known as one of the best – perhaps the best – neuroparticipant therapist in the world. But his world is turned on its head when a doctor who has been blind from birth approaches him – and tells him she wants him to teach her to share the brainwave patterns of patients who can see.

Perhaps the most remarkable thing about this novella is that it was written fifty years ago. In it, self-driving cars spin swiftly and – barring tampering – safely along his highways of the future. Technology has allowed the elimination of starvation and most accidental dangers – but mental illness and suicide rates have continued to skyrocket.

Charles Render contemplates why his profession should continue to thrive in a comparative utopia – and brings in Jungian observations about patients often returning to the deep myths of their ancestral cultures in times of moral confusion.

That’s all I can say without spoilers, but suffice to say Zelazny paints a picture of a future that is both beautiful and uncannily similar to today – and ties together half a dozen character plotlines to illustrate his theses beautifully through the life of Charles Render.

It probably says something that Zelazny won not one, but two, Nebula Awards in 1965. Other contents of “The Nebula Award Stories 1965, Edited by Damon Knight,” include:

“The Doors of His Face, the Lamps of His Mouth” by Roger Zelazny (best novelette winner).

A self-described “fish story” taking place on Venus, this is…let’s just say it’s one hell of a fish story.

Fifty years before James Cameron’s “Avatar,” New Wave authors were contemplating what happens when an ecosystem with a neural network wants to defend itself.

Fun fact: Ellison began proceedings to sue the movie “In Time” for copyright infringement based on similarities to this story, but agreed upon viewing the movie agreed that it did not have enough in common with the story to justify the suit.

In which a man gets into ever-deepening legal trouble due to a series of computer errors. Probably says something about the predictive power of this story that I didn’t find it funny or groundbreaking so much as just frustrating.

When a two-man crew is stranded beneath Venus’ crushing atmosphere, they must figure out if the problem with their ship is mechanical – or psychological.

Fun fact: after two consecutive dead ties between “He Who Shapes” and “The Saliva Tree,” the Nebula panel decided to simply give the award to both stories.

I didn’t quite understand why this one was nominated the first time I read it, and I still didn’t the second time. It probably did play a role in inspiring Sandra M. Odell’s much more interesting recent story Godfall, though, so we have it to thank for that.

Fortunately, “The Nebula Award Stories 1965, Edited by Damon Knight” does not seem to have gone out-of-print too early. Although it has never been converted into e-book format, copies can be found used online for less than $5.

Also, one edition has a cover which I maintain is further proof of Nicolas Cage’s immortality. Remember kids, this was painted 50 years ago: 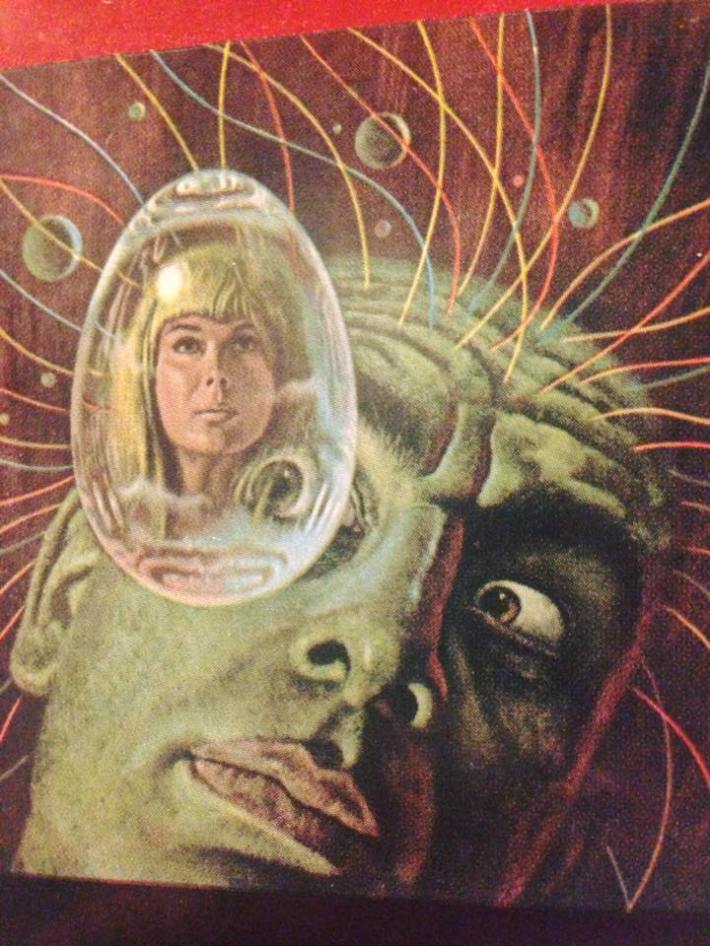