When I was growing up, we only knew of nine planets. Most of them were so wildly different from each other that we had no idea what to expect from planets around other stars – or whether any of those even existed. The idea of a tenth planet – planet X – was mysterious and exciting. We thought it would be a big revelation if planet X was discovered.

Today, we know that most stars have multiple planets orbiting them. There are likely hundreds of billions of planets in the Milky Way galaxy, and we’ve personally observed over 1,000 planets outside of our solar system using the Kepler telescope.

One of the biggest surprises of the Kepler telescope has been the discovery that 70% of all stars are now believed to have planets, and 17% of these – 1 out of every 6 stars – are thought to have a roughly Earth-sized planet.

Unfortunately, there’s a great deal we still don’t know about these extrasolar planets. We don’t yet have telescopes powerful enough to look for telltale signatures of native life, such as free oxygen in the atmosphere. We can tell a few things about them using telescopes like the Kepler, but until more powerful telescopes like the James Webb come online, learning many details of these planets’ fates is going to have to wait.

After all, in our solar system, Earth, Venus, and Mars are all within the habitable zone, and Earth and Venus are quite similar in size. But Mars is too small to hold onto the atmosphere and magnetic field necessary to support a thriving ecosystem (that, at least, we can predict since it’s thought to be a function of planet size), and Venus is a hellish hothouse whose surface temperatures can melt lead.

In this blog series we’ll look at a few methods of classifying extrasolar planets based on what we do know about them, and what might be possible for them based on the planets we see in our own solar system. We’ll examine how different types of planets can be used to explore different plots and possibilities, if you’re not already chomping at the bit to explore one type of a planet or another by the time we’re done describing them.

When thinking about stars and planets, it’s helpful to know how both of these form. This can help us to think about some essential questions, like how they’re related, and how they acquire their minerals and atmospheres.

Stars and planetary systems both form from Giant Molecular Clouds – sometimes abbreviated as “GMCs” by astronomers. These clouds are exactly what they sound like: giant clouds of molecules.

Over the course of hundreds of millions of years, these giant molecular clouds gradually collapse. This collapse is driven by their own gravity: molecules are gravitationally attracted from less dense regions into more dense regions, which makes these regions even more dense and begins a runaway coalescence effect.

As these clouds gain angular momentum from infalling matter, they gradually form a shape like that of a spinning disk. The largest center of mass within the disk generally becomes a star, while smaller lumps of matter that don’t fall inward to become part of the star coalesce into planets.

A star and its planets, then, are all made of the same stuff. But the incredibly massive star usually captures most of the lighter molecules like gases in the system, while lumps of metal and wisps of gas that were not attracted into the star’s core form the surrounding planets and their atmospheres.

Where do these molecules come from in the first place? Well, from two major sources:

The image below shows a diagram of a red giant star – a star that has almost exhausted its easy-to-fuse hydrogen and helium fuel, and is near to exploding when its fusion process catastrophically collapses.

The layers of the star are labeled with the chemical symbols they’re thought to contain, as the heavier elements created by the fusion of lighter elements into larger atoms build up:

The stars of today are made from the giant molecular clouds left behind by those exploding stars, which include both primordial hydrogen and helium, and minerals and heavier gases made in the hearts of dead, ancient stars.

So it really is true what my mentor-in-spirit Carl Sagan used to say: you are star stuff. The carbon, nitrogen, oxygen, and basically any element in our bodies heavier than helium likely came from the hearts of dead stars.

Now, in the aftermath of the primordial Population III stars (so called because scientists discovered their existence last, even though they were the first stars in existence), Giant Molecular Clouds contain both light gases and heavier minerals and metals.

Conversely, stars and planets on the edges of the galactic plane, where star density is lower may consist mostly of gas, with metal atoms from dead Population III stars being fewer and further between. These systems might have fewer rocky planets and would have darker, emptier skies.

The important thing to know is that your stars are going to be made, basically, out of two types of substances: extremely light gases like hydrogen and helium, and heavier elements such as carbon, nitrogen, oxygen, and metals. Depending on where in the galaxy your planetary system is, the relative ratios may be different.

This means that all of your planets are likely to have some sort of core of heavier elements like metals, and some sort of atmosphere composed of gases.

For gas giants, huge metal cores may be liquified and become powerful, spinning magnetic dynamos beneath an incredibly thick atmosphere of gases (1,300 planet Earths could fit inside Jupiter, for example and most of that space is high-pressure gaseous atmosphere).

Smaller planets are generally less able to hold down extremely light elements like hydrogen and helium with their gravity. These light elements may “leak” out into space or “be blown away” by stellar winds for planets that are Earth-sized and smaller. That’s just fine for us, since we rely mostly on heavier gases like nitrogen and oxygen to survive!

Larger planets, on the other hand, can hold down larger proportions of hydrogen and helium atoms. These planets may even end up being low-density enough to float in a bathtub, like Saturn. But the tremendous gravity of the planets can produce extreme atmospheric pressures and temperatures.

Objects falling in toward a gas giant’s core had better find a way to float or glide in its fierce atmospheric winds. Because if they can’t fight the pull of gravity, they’ll be crushed or burned – whichever comes first – before they ever reach the gas giant’s solid cores. 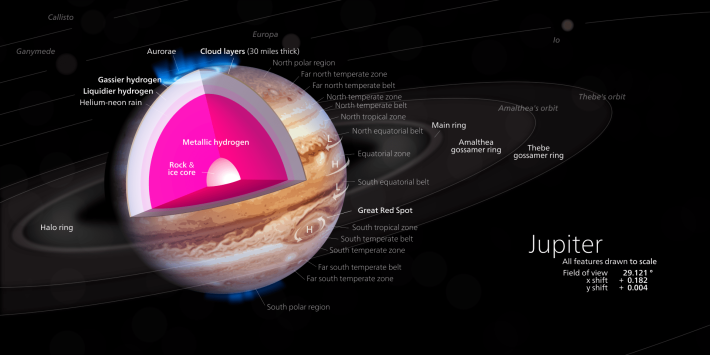 Image credit to The Universe Today for this graphic showing the spectacularly weird insides of a gas giant. Imagine how much pressure must be required to turn hydrogen, the lightest gas of all, into a metallic substance and you’ll understand why you don’t want to fall into that layer of a gas giant’s atmosphere.

This need to constantly stay afloat has led authors like Greg Bear to postulate floating, lighter-than-air intelligent life in my favorite piece of literature of all time, his novella Hardfought. Anyone looking for a really spectacular piece of worldbuilding, and a spectacular piece of poetry, check this novella out – and especially take note of the fact that as far as I know, pretty much all of his science is still plausible 40 years after it was written!

When a gas giant gets big enough to ignite nuclear fusion at its heart – congratulations, it’s a star!

We’ll talk more about how planets within a planetary system can influence each other’s climate and orbits in my upcoming book. For now, what’s important to know are these general principles:

Now that we’ve got those general principles in mind, let’s look at the three possible ways to classify a planet.

These systems of classification aren’t mutually exclusive. Instead, they’re overlapping. By combining different attributes of size, orbit, and composition, we can create an almost infinite variety of planets. We’ll look at how to do that in more detail in the blog entries to come, and I’ll provide some worksheet templates in my upcoming book.